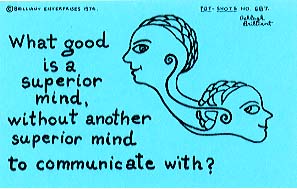 From the MENSA BULLETIN, February, 2001 (MENSA is an international society for people with IQ's in the upper 2%)
Interview with Ashleigh Brilliant
by
B. Meredith Burke

"By using your intelligence, you can sometimes make your problems twice as
complicated."

"Inside every older person, there's a younger person wondering what happened."

Epigrams such as these, dubbed "potshots" by their creator, garnered Mensan
Ashleigh Brilliant public recognition from alma mater Claremont (CA) Graduate
University last May. He was designated a "Distinguished Alumnus," and this
fall headed back down there for a ceremony elevating him to an alumni hall of
fame. Brilliant, whose admitted ambition is to win the Nobel Prize for
literature, basks in this recognition of his efforts, especially since he has
no idea how he got nominated.

Like many creative eccentrics, his early life eschewed predictability. Born
in England in 1933, Ashleigh along with his sister and his mother was
stranded in Toronto, her hometown, by the start of World War II in 1939. In
1941 they rejoined his father, a British civil servant who had obtained a
transfer to Washington, D.C. Moving back to England in 1946 Ashleigh finished grammar
school in a London suburb and then completed a degree in American history at
the University of London's University College. At age 21 he emigrated to Los
Angeles via Toronto.

In 1955 he received a scholarship to Claremont where he earned an M.A. in
secondary education. He quickly learned he was not cut out to be a high
school teacher. Next he moved to northern California. Then in 1959 during a
Cold War thaw he and a companion spend six months touring Europe, two weeks
of which were spent in Russia. By attending a "World Youth Festival" in
Vienna apolitical Brilliant belatedly discovered he had patronized a
Communist-linked gathering, an act that later delayed receiving U.S.
citizenship.

Next came a stop at Berkeley, where he earned a Ph.D. in American history.
His first college teaching job did not end auspiciously. Recalls Ashleigh:
"I called the ACLU" when Central Oregon College asked him to leave following
his playing a recording of Allen Ginsberg's (unexpurgated) "Howl" for an
after-hours student group.

Less structured was teaching on a 1966 Floating University voyage where he
met fellow faculty member and future wife Dorothy Tucker.

Today's witty epigramist emerged during the 1967 "Summer of Love." Haight
Ashbury friends sold some of Ashleigh's paintings to which he had affixed
whimsical titles. Buyers went for the titles, so he began writing
epigrams--"unpoemed titles"--for as yet unpainted paintings. He produced and
hawked on the streets pamphlets (15 cents a copy), potshot postcards (10
cents each, of which he retained 9 cents), and his "hippie" songbook. The
latter with lyrics as wry as Tom Lehrer's, included "The Intercourse Song"
(to the tune of "God Rest Ye, Merry Gentlemen") a paean to the Pill.

The first 1,000 postcards with ten different messages included such classics
as "Wait! Come back! There's a part of my face you haven't stepped on yet"
and "No, life isn't what I wanted. Don't you have anything else?" Fans offered
to distribute them. So did Dorothy, whom he married in 1968.

"She admired my genius," explains Brilliant solemnly. Although Ashleigh has been an intermittent Mensa member since the 1960s, he admits to coasting on Dorothy's life membership much of the
time.

Moving nearer southern California family members Ashleigh and Dorothy ended
up in the then-inexpensive Santa Barbara in 1973. It has served as a base of
operations and for extensive foreign travels ever since.

In 1975 he hit the bigtime: the Chicago Tribune/New York News Syndicate
courted him. However, their marketing efforts were disappointing. After
twelve years Ashleigh struck out on his own.

"I've had extraordinary luck in attracting great people to aid and promote
me," he admits gratefully. His assistant has worked for him twenty years;
his publisher approached him having seen his cartoons. Up to thirty papers
run his cartoons regularly (he is seeking more outlets) plus Mensa and
Unitarian publications are among those who use his material gratis. His web
site (www. Ashleighbrilliant.com) generates orders. The count for
copyrighted epigrams has passed 8,700 and is still ticking. A UCLA art
historian recently wrote him a letter comparing him favorably with other
political cartoon luminaries.

One person who happened into his life was me. I had become a fan through his
appearances in Unitarian newsletters. In the early 1990s I was passing
through Santa Barbara a couple of times a year as I drove from the San
Francisco area to Los Angeles. I got up the courage to write him a fan
letter, enclosing some of my own columns as a sort of introduction. I was
surprised but delighted to receive a letter thanking me and inviting me for
tea when I next came through town. Needless to say, I followed up on this
invitation.

I was able to help Ashleigh on one of his more successful community activist
efforts, a push to ban gas-powered leaf blowers: "Your right to make noise
ends where my ear begins," expressed Ashleigh's reaction to these raucous
invaders of suburban privacy. Sharing his distaste I put him in touch with
like-minded Palo Alto activists. Ashleigh succeeded in getting the Santa
Barbara City council to ban the blowers.

Now as a fellow Santa Barbaran I enjoy both his and Dorothy's friendship and
the results of his leaf-blower-ban efforts. Daily I read a new Potshot in
the local Santa Barbara News-Press.

Ashleigh avoids slang and fads, and the epigrams must be translatable. Recognition has come from the world at large. Both the Wall Street Journal and People magazine have
featured him while CNN and CBS Cable have interviewed him. Gratifying as the
Claremont award was, it offered him "five whole minutes to speak at a
breakfast preceding commencement." Still it confirmed his standing in his
chosen profession: writer. "A cartoon needs the art, but my words stand by
themselves."   ##