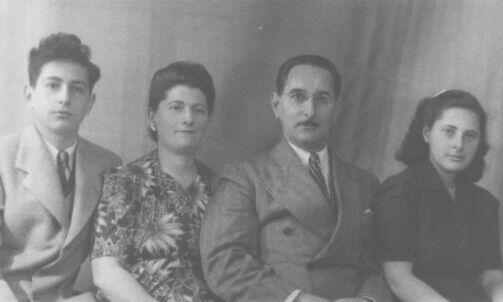 The following was written by my father to his family in England:

…………………….
The first five days out were like a pleasure cruise and worth £50 in itself, and by that time we had only got as far as Cape Wrath. It was a "Cargo-passenger" boat, and the accommodation for the four of us was marvelous; the food was also perfect, likewise the weather. I can't go into details about convoys, etc., but at 7 p.m. on the 20th of May we were torpedoed without warning. Now everything might have been alright if we hadn't had a native crew (five Malays and 30 odd Indians) with white officers, of course. I went on deck after the explosion (with much confusion in the ship) and could see it wouldn't sink in five minutes. I went back to my cabin twice to gather a few things, but all the lights had gone and the glass smashed, and everything thrown about, with the fire extinguishers burst and the stuff all over the place and water and oil all about. - We weren't far from the engine room where the torpedo had gone clean through, -- and I brought my suitcase and attaché case up on the boat deck leaving everything I had out in the cabin, and, of course, two large trunks nearby. I had put on my overcoat and a cap, realizing that we might be all night in the open boat and I also put on a lifebelt, but when I got on deck there was confusion. The native crew had panicked and were hacking at the boat ropes and scrambling down ropes over the boat's sides; one boat was nearly lost by being dropped straight into the water, but was recovered. There was a high sea running, and my boat was on the weatherside of the ship. I was the only one of the four passengers to get into the right boat, but only by good fortune was I saved at all. There were no ropes available, for the boat and rope ladders were not in the right place; the position was as under:

They intended transferring us to a rescue vessel and taking us back to Scotland or Iceland; in fact, all the officers and crew were dispatched to Scotland. I, however, made representations to the Captain and asked for a transfer to a westward bound ship of the convoy; he got in touch with the Commodore of the escort vessels, and after a signal palaver and various questions, the transfer was arranged. With me came the other two passengers, but they had to signal to the tug for the 4th passenger (who was part of a "team" with the 3rd) for his transfer, too! (Incidentally, after being rescued, it took them about 15 hours to pick up the convoy again). Well, about 9 a.m., all was set, when we had warning of an air attack imminent. Fortunately it turned misty and began to rain as well, and in this they manned a boat (we got in first this time) and lowered us. But in that sea it was no joke; the previous evening we had the choice of going then or waiting till the morning. As the sea was very rough the others wanted to wait, though I'd have gone then in order to get away from that ship; but one of them was ill and couldn't move. Well, on lowering the boat with a bang, I got hit on the head with an oar, and the other passenger got hit with the iron end of a rope, but we managed to be taken aboard; we had lifelines thrown to us; one man it slipped, the second got caught and nearly pulled into the sea (this was H. and he got a wetting in part again) and I managed O.K.

We were on board this cargo-passenger ship for 9 days before we reached Halifax, and you can imagine it was no picnic without a brush or a razor or anything at all between us. There happened to be a very small lounge which they converted into a dormitory for us; we slept on trestle beds almost touching each other, and no ventilation owing to the black-out. Nevertheless, the catering was good, and we stuck it out well. Even so, we had plenty of scares, and we slept in our clothes for about a fortnight altogether. There are quite a number of things I can't mention in this letter, but you can be sure we were more than glad when we reached Halifax, where I landed for a few hours, cabled you, phoned Washington, and phoned Amel who wrote to you the same night. We had the Commodore of Convoy on board and we had to land him at Halifax. Here they had to make special arrangements for me to continue with the boat to New York, the others had gone by plane. I had the Commodore's cabin, but you'll see that I never slept there. On the way to New York, early the first night, we had foggy weather…………………………………………but I was bad the following night. In fact, I didn't sleep for 3 nights and didn't eat or drink at all for 36 hours. Naturally, when I landed at Bay Ridge, Brooklyn, I was worn out, although I'd had easier spells. We had to remain in New York Harbour 24 hours before landing. I had been through all sorts of climates since embarking in England, from icy cold to heat wave, and through gales - one exceptionally bad. We'd been traveling all directions and zig-zagging, etc.; I spent only a few hours in New York, and I was anxious to get to Toronto (I had made arrangements by 'phone with Washington to spend a week there), so I didn't make any family calls, etc., especially the way I felt and looked - being a survivor. I traveled overnight to Toronto, which meant another almost sleepless night, and arrived in the morning almost utterly exhausted though relieved to be there at last. Marsh had got on the train at Sunnyside (the station before) and found me on the train. ……………………………………………………………………………..
…………………………………………………………………………………………… ##